Here’s why treating plastics as one kind of thing in science and activism isn’t useful and can even cause harm. 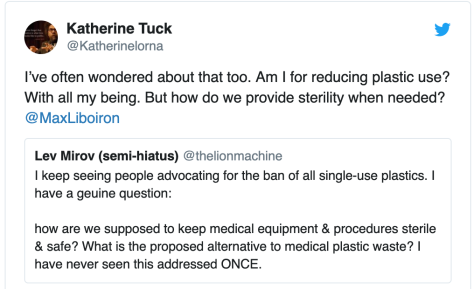 The term “plastic” refers to many polymers with many, many associated chemicals. A paper by @ChelseaRochman et al “Rethinking microplastics as a diverse contaminant suite” warns that treating plastics as a single compound misses effects, sources & solutions.

Likewise, single-use include medical plastics, disposable packaging & other items. Conflating them can cause harm. For example, in the case of straw bans: see @DisVisibility‘s work on how disabled people use straws to create livable worlds and banning them wholesale is a form of ableism (follow #suckitableism for more).

I’ve talked before with @FrankNewsUS about how plastics are also kin: we have responsibilities to them, even when they misbehave. Obligation & responsibility require SPECIFICITY–you have diff obligations to your daughter than to the mail carrier. Same with plastics.

But also plastic is our kin, it’s our relation. It’s from ancestors – organic ancestors from a long time ago. And if you neglect your relations to that, then you’re bad kin. Even when plastic is misbehaving, which means it’s being bad kin, you can still do good kinship with bad kin. And you know this. You have an asshole uncle somewhere. He might be bad kin but you still call him on his birthday, or bail him out of jail depending on what kind of bad kin he is. The same thing is true of plastics.

From “Anti-Colonial Science & The Ubiquity of Plastic,” interview with Frank News.

Without differentiating between medical plastics (while also making them less toxic, as Healthcare Without Harm is doing) and other single-use plastic, or the difference between PVC (so many chemicals!!) & silicon (not so many) we can’t be properly responsible to the problems & ethics of plastics.

Jody Roberts has written about this issue in “Reflections of an Unrepentant Plastiphobe”: his fear and dislike of plastics confront the medical plastics that keep his daughter alive. These are the grounds for ethics: specificity, context, nuance & responsibility to them.

Plastics have been other than they are now (not mass-produced, not cheap, not disposable) and they are many things now (used as pollution-for-profit, also used to give life). We have to know the differences to maneuver the plastics problem ethically.

There’s no such thing as “plastic.” Only plastics. Please proceed accordingly.